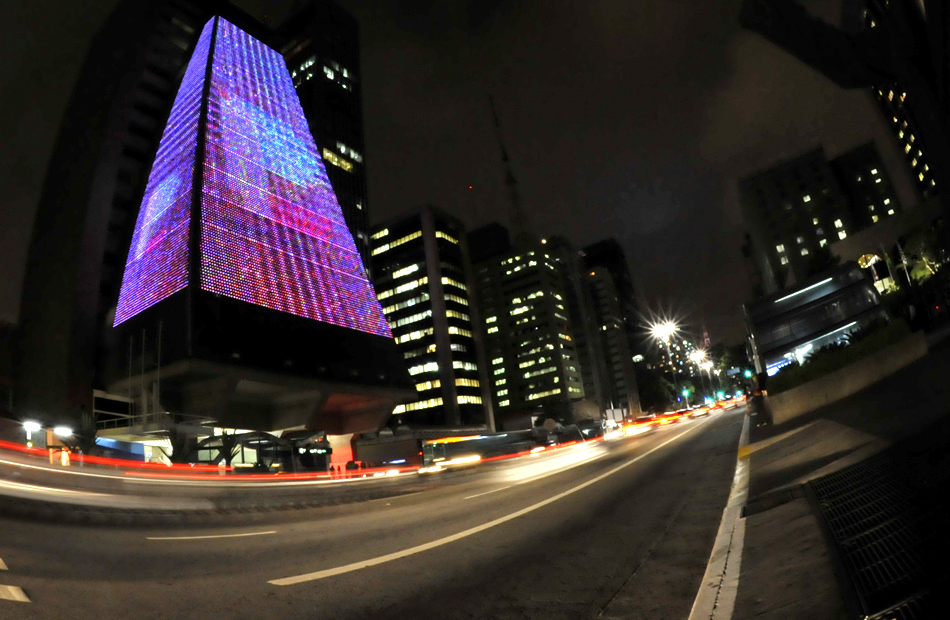 Since October 2014 the EletriQ is responsible for creating Artistic Videos for Digital Art gallery Fiesp / SESI-SP.

Luis Eulalio Bueno Vidigal Son Building, built in 1979, with an imposing pyramid shape at Avenida Paulista, the most important avenue of Latin America and cultural epicenter of São Paulo, is an icon of the metropolis.

In 2012, a pioneering initiative, was inaugurated on the facade of the headquarters building Fiesp / SESI-SP Digital Art Gallery SESI-SP, a space for digital artistic expression that delights the people who pass by the São Paulo metropolis night.

The facade of the building became the first art gallery to open in Latin America. With 26,000 LED clusters and electricity consumption per hour of 4.5 kVA, mean even just a family home, the electronic platform enables the transmission of up to 4.3 billion color combinations.

Since its debut, the Gallery has been exploring different aspects and approaches to digital by holding exhibitions organized by the Cultural Center Fiesp – Ruth Cardoso, who works in the same building since 1998.

The format in the open and public space allows addressing issues of interest in the city in an intuitive and participatory manner, and raise discussions about the impact that a large metropolis has on the lives of its residents. Thus, it is exploring the potential for communication of digital multimedia facade.

Digital Art Gallery SESI-SP Sao Paulo puts on the map of the world’s art and technology festivals and at the forefront of the cities that make up the culture as part of its urban fabric.

The EletriQ is very proud to be able to exercise their creativity in a public space as democratic, technological and important to the artistic scene of São Paulo.

Talk to us. We love meeting and talking to companies, products and brands
that want to connect truly with consumers.